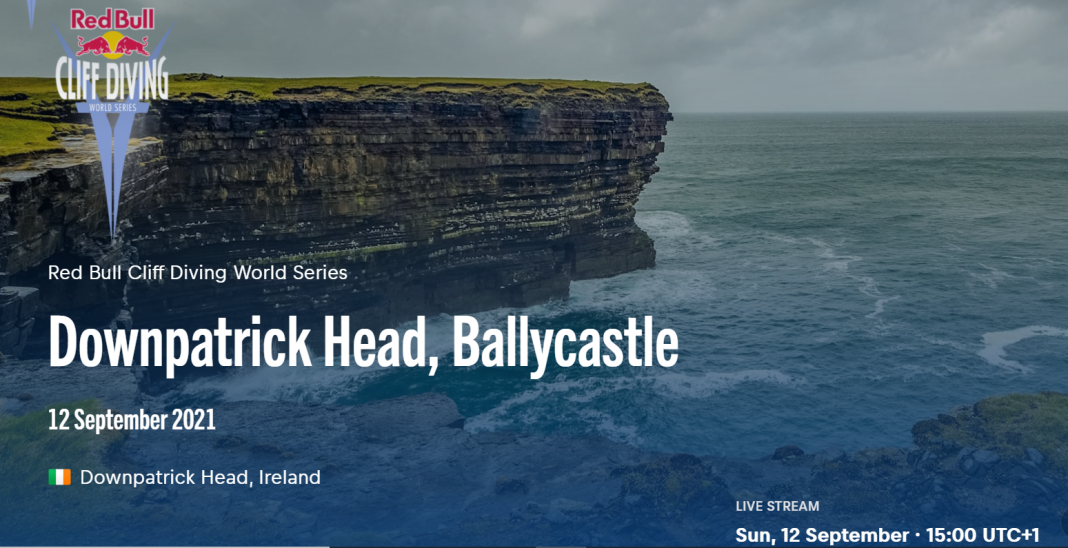 The Irish leg of the 2021 Red Bull Cliff Diving World Series awaits the cliff diving elite with rugged conditions in a brand-new location on September 11.

Halfway into the season, the world’s best cliff divers – including the reigning champions Rhiannan Iffland from Australia and France’s Gary Hunt – will find themselves competing from a brand-new launchpad on the sheer cliffs of Downpatrick Head. After three Irish stops in the rough waters of Inis Mór, and more recently a showing in Dublin Bay, the Red Bull Cliff Diving World Series heads to the north coast of County Mayo where the Atlantic waters will once again test these talented athletes to their limits for their fifth visit since 2012.With at least one dive directly off the cliff, the 12 men and 12 women will get a chance to really connect to the purity of the place and display their sport in its most natural form, before returning to the platforms for their more difficult diving manoeuvres.

Difficulty is a key element when it comes to successfully fighting for the highly-contested King Kahekili trophy, awarded for the overall World Series champion title in both the women’s and men’s competitions.After the latest competition off the historic Old Bridge in Mostar, Bosnia and Herzegovina, it’s the reigning champions Iffland and Hunt leading the rankings in the World Series. While it was the first victory for Hunt under the French flag, Australia’s Iffland added a 10th triumph to her three season-long winning streak.

In her most recent statement, the 29-year-old diver confessed that she grew with the pressure of the winning streak and is now ready to make it one more win in Ireland. But who’s the biggest threat to the Aussie from the 21m platform?Newcomer Molly Carlson from Canada and Mexico’s World Series veteran Adriana Jiménez, are two wildcards that have faced up to irresistible Iffland, earning second-place finishes in France and Bosnia and Herzegovina respectively. Jessica Macaulay, also from the Canadian high diving team, has shown the most consistency with two third places so far this year.

In the men’s, record winner Hunt seems to be getting what he’s been looking for: competition. The challenge faced by the Frenchman comes in the form of Romanians Catalin Preda, the wildcard who scored a sensational win at the opening stop in Saint-Raphaël, France and Constantin Popovici, who pipped his compatriot to victory in an exciting Oslo Exhibition event in August. Popovici also performed a sensational final dive in Moster last weekend, for which the 32-year-old picked up two 10s from the judges to finish with a strong second place.”It seems like every year it’s getting more and more difficult, but this year both the Romanian divers have been working very hard and showing great consistency,” stated 37-year-old Hunt after his 40th World Series victory from the 27m platform.More amazing cliff diving contentDoes size matter? Oslo unveils cliff diving’s …Take these cliff divers to Ibiza and you know they’ll …Relive the greatest rivalries in cliff diving“It was a wake-up call. However, I know I’m prepared mentally, well aware that everything in this competition needs to be perfect.”With two ranking stops in the books and three more to go, there’s still a chance for other divers to have their say. But right now, all the signs suggest a thrilling three-way title tussle could be on the cards and the all-natural location on Ireland’s most westerly point will prove crucial.

Watch the action live on Red Bull TV on September 12, or catch the replay right after the event. And be sure to download the free Red Bull TV app so you can watch unmissable cliff diving on all your devices!

How to Explore the Causeway Coastal Route.

How to Explore the Causeway Coastal Route.