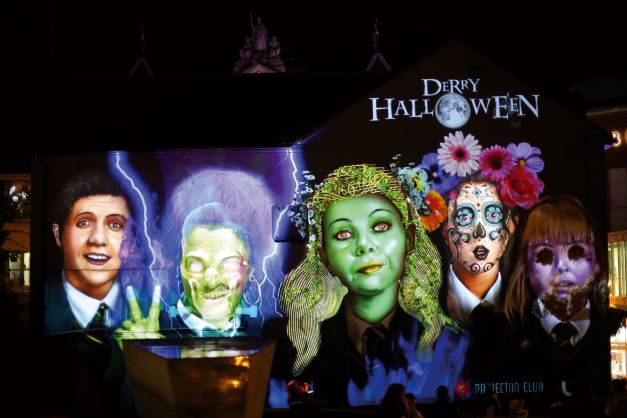 The beautiful walled city of Derry~Londonderry will once again unleash the ancient Celtic spirits of Samhain as it celebrates Halloween from 28 – 31 October 2022.

Now established as the biggest Halloween festival in Europe and voted the world’s best Halloween destination in a poll by USA Today, Derry Halloween is set to welcome over 90,000 visitors to its wonderfully wicked witch’s brew of enchanting entertainment.

The origins of Halloween lie in the mists of pagan Ireland over 2,000 years ago, when the ancient festival of Samhain was celebrated to mark the beginning of winter. At that time the veil between our world and the Otherworld was believed to be at its thinnest, allowing spirits and demons to easily pass between the two.

At Derry Halloween some of these ancient spirits will be roaming the streets of the city as well as the nearby town of Strabane.

Expect to meet Cailleach Queen of Winter, goddess of the cold and winds, as you wander along the city’s Whispering Wharf.

Within the walls, the City of Bones will emerge with likely sightings of Walter de Burgh, the starved knight, and his ancestors. And in the Forest of Shadows you may glimpse Phantom Queen Morrigan and her shape-shifting creatures.

The streets will be thronged with revellers disguised in scarily good costumes, who will be treated to fabulous food, street theatre, stunning light shows, live music and lots of frights and delights around every corner.

Bars and restaurants will present special Halloween menus with some also adding a ghost storytelling experience. Even the Derry Girls mural, now a must-see sight in the city, gets a Halloween makeover.

As always, the festival will culminate in the colourful Hallowe’en Carnival Parade featuring circus and dance performances and a bewitching display of ghostly guises. The parade ends with an amazing fireworks display that will light up the skies above the historic city.

With almost 1,500 years of history, Derry~Londonderry is a fascinating city to visit at any time of the year. But at Halloween it becomes a high-spirited cauldron of colour and cheer, eagerly welcoming visitors from this world and the next.