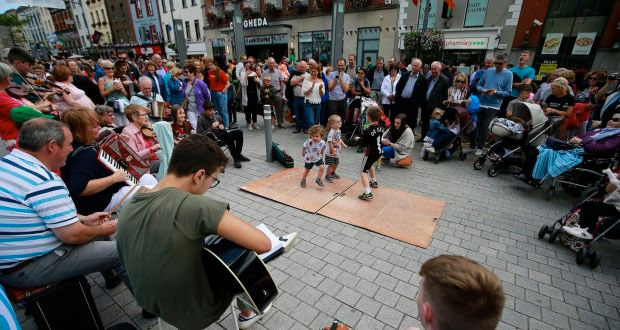 Tens of thousands of traditional music-loving folk gathered in the town of Cavan for the 2010 Fleadh Cheoil and less than 24 hours into my maiden festival visit, I found myself smack bang in the middle of Lough Oughter.

Dating back to the early 1950s, Fleadh Cheoil na hÉireann (Festival of Music in Ireland) was established to promote Irish traditional music and the Fleadh has since developed as a mainly competitive event, including showcases of concerts, céilithe, parades, pageants and street sessions.

The Fleadh had been going on all week and was building up for a monster finale by the time the weekend rolled around and numbers swelled with bandwagon jumpers who turned up for Friday and Saturday night. I was one of them.

Paul Brady was playing later on Friday night but first a stroll down Main Street to sample some of this famous Fleadh ‘Craic agus, you’ve guessed it, Ceol’.

Where better to start than the Top of the Town – no seriously, that’s the name of the pub. Plastic glasses were the order of the day and while not ideal for the Black Stuff, you just have to go with it and make sure not to hold the glass too close to you as you squeeze through the crowds and back onto the street.

So plastic pint of porter ‘i mo lámh’ – getting into the festive spirit here – I made my way over to the Gig Rig to catch a few live tunes. The young, the old, the brave and the bold were out enjoying themselves; watching, listening, singing, dancing. The band played, the crowd swayed, there was neither malice nor menace. I found myself in the middle of the biggest party of the year and I was loving it.

My journey onwards and upwards was randomly interrupted by many a busker and several refreshment stops in any of the plethora of pubs along and off Main Street. And each pub would have a traditional ensemble in the corner playing high quality traditional music.

You’d pay good money to see some of these musicians, but here they were jamming for free where everyone was welcome to join in whether you had your banjo or your tin whistle or just a toe that could tap in tandem to the traditional tunes.

And so it continued, flutes and fiddles everywhere, Sean Nós dancers with ringlets in their hair, amhráns, bodhráns, amadáns, and not a choc ice in sight.

Time was called at some stage. It was late, or early perhaps.

When Saturday comes, you remember you’ve made plans to head out the road to go kayaking around one of Cavan’s 365 lakes. It was approaching midday as I rolled into Carratraw Canoe Centre still with the strain of the fiddle ringing in my ears and the thump of the bodhrán banging in my head.

The clouds parted, as did my bad mood, and before long I found myself effortlessly gliding down the majestic waters of this River Erne inlet. I was now moving to the beat of a different drum in splendid isolation. The hangover and headache were back onshore as I found my rhythm and not long after, the castle appeared in the distance, sitting pretty in the middle of the glass-like lake.

Clough Oughter Castle was built by the Anglo-Normans in the early 13th century but was captured by the O’Reilly clan, the Irish rulers of east Bréifne. Owen Roe O’Neill, leader of the anti-English revolt of the 1640s, died here in November 1649. One side of the castle was bombarded by Cromwell’s canons and you will marvel at the strength of the structure with walls that must be two-metres thick. There is even a small landing harbour where you can park up and enjoy a packed picnic and a couple of cold ones.

I vowed I’d return, to both the music and the water.

Eating Out in Cavan

There are plenty of palate-pleasing restaurants in Cavan Town and dotted throughout the county. The Oak Room on Main Street is a decent spot if you are staying in town, while the Cavan Crystal hotel and the restaurant in the Radisson Blu Farnham Estate also boast impressive menus. The Side Door, above The Orchard Pub just on the edge of town, is another good option, while further afield, The Olde Post Inn in Cloverhill is one of the best in the country.

The jewel in the crown of Cavan gastronomy has to be MacNean House & Restaurant in Blacklion where ‘local boy done good’ Neven Maguire is the owner and head chef. The celebrity chef’s restaurant is a bit off the beaten track but well worth the visit, considering it was voted Restaurant of the Year in 2007.

Fleadh or no Fleadh, Cavan Town is a lively spot for a weekend break with many excellent pubs to choose from. The town centre is nice and compact so everywhere is within walking distance. Blessings, McCauls, the Imperial, Thomas Ashe, Abbey Bar and Donohoes ‘The Black Horse’ are all great pubs and there are many others that go late including Síbín, while OTO is the nightclub of choice for the locals.

I stayed at the Radisson Blu Farnham Estate, just outside Cavan Town. This retreat hotel is set amidst the rolling Cavan countryside, sitting on 1300 acres and surrounded by seven kilometres of walking trails and fishing holes. A trip to the spa and a swim in the indoor/outdoor infinity pool will soon get you in tune with your surroundings and the food in the Botanica restaurant was top class. Speaking of food, make sure you don’t miss the buffet breakfast: it will set you up for the day. I didn’t get a chance to try out the recently opened 18-hole Jeff Howes-designed golf course but I suppose that will give me a decent excuse to get back to the hotel and to Cavan.

For more information on Cavan and the Fleadh Cheoil visit: