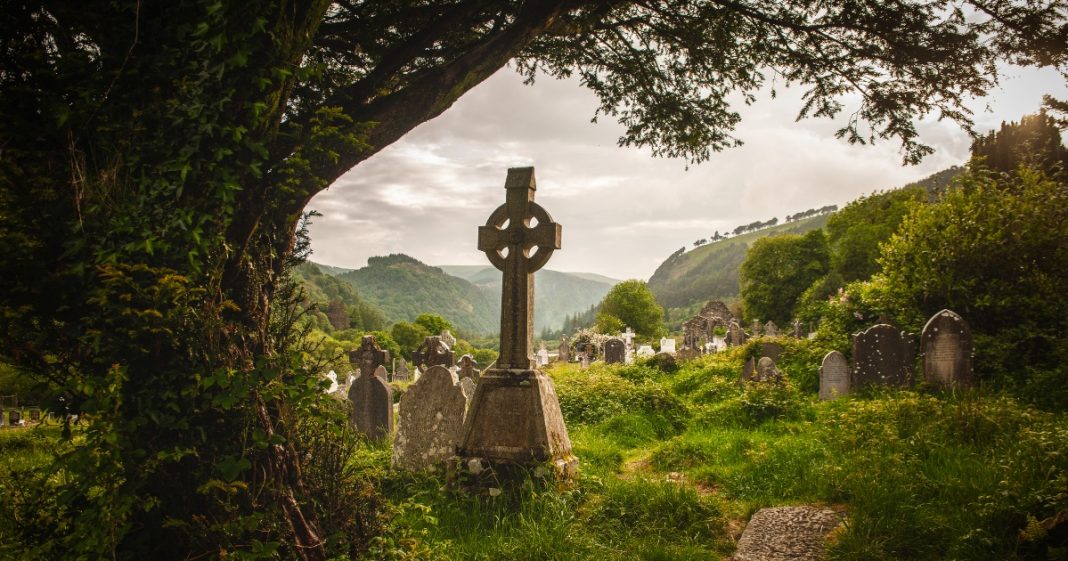 I enjoyed the bright morning hours of New Year’s Day for the first time in recent memory.

The last strains of 2012 were eased away with a combination of cheese, chocolate and Spanish Grenache, as the hootenanny rang in the New Year and simultaneously called time on a hectic festive season that was both enjoyed and endured in equal measures.

The New Year had brought sunshine and remained mild for the season, so a trip out of the city seemed the best way to kick-start the system with the obligatory January fitness regime kicking off a day earlier than planned.

So taking advantage of the non-existent bank holiday traffic, I was out of the city in twenty minutes and winding my way up the lower slopes of the Wicklow mountains, heading into the heart of the Wicklow National Park for an active day out at Glendalough.

But its aesthetic beauty and geological characteristics derive from the Ice Age when a slow moving glacier carved through the valley leaving as spectacular sight as you will find throughout Ireland or beyond.

The great lake, shimmering in the winter sunshine and bordered by towering Scots Pine and oak woodlands, is the focal point of the national park and is the starting point for the many walking trails that take you up and around this very special and peaceful place.

The fresh January air was serving its purpose, my head already clear arriving at the lower lake as I set off on one of the easier of the nine walking trails, the Miners’ Road Walk.

The walk, which skirts along the perimeter of the Upper Lake, would certainly be in the easy category for hill-walkers but was ideal for my post Christmas energy levels.

Along the trail, an opening in the woodland offers excellent views of the cave known as St Kevin’s Bed and the rest of the five-kilometre stroll takes you down to the old mining area of the valley, where lead was once sourced.

The walk takes no more than an hour with plenty of perfect places throughout to stop and take in the amazing scenery or perhaps enjoy a picnic throughout the summer months, while the gradient remains constant with very little climbing involved, which again suited this out-of-practice plodder.

The surrounding hills are barren yet intriguing, where the scree slopes reminded me of the base of the Franz Josef glacier in New Zealand, with the obvious exception being that the icy mountain-top has long since departed.

Feral goats wander this end of the valley, while peregrine falcons can often be spotted soaring above with their distinctive high-pitched cry.

Other walks, all of which are colour coded with regular signposting, include the Poulanass trail, which takes you on a steep climb through the oak woodlands to the waterfall, before making its way down to St Kevin’s Cell. This trail is ideal for birdwatching and also offers excellent panoramic views of the Upper Lake.

The Woodland walk is approximately four kilometres and is another of the easier trails, taking you through the woodlands around the adjacent Glendasan Valley and back around to the Lower Lake, while the Spinc trail can take up to four hours and would be aimed at more serious walkers.

The Spinc gets its name from the Irish for pointed hill and ascends up past the Poulanass Waterfall before joining a boardwalk of 600 steps, which takes you to a viewing point overlooking the Upper Lake.

After completing the Miners’ Walk, I followed the Green Road Walk, which leads over the Lower Lake wetlands and up to the Monastic City, where the remains of the old medieval settlement can be explored.

The majestic Round Tower is still in excellent condition and keeps guard over the settlement as it was once used to call the monks to prayer. Dating back to the tenth century, the tower stands over 100 feet in height, boasting six floors with the front door located 12 feet above the ground, which would have been accessed by ladder, being part of the monastery’s defence mechanism.

The impressive and substantial remains of the Cathedral shows the quality of work that went into constructing what was one of the largest early Christian churches in Ireland, while St Kevin’s Church, complete with belfry, remains intact and welcomes you into the settlement.

And the hearty evening meal at a nearby hostelry tasted all the better knowing that this particular session was all done for the benefit of my health.

Exploring Glendalough and Beyond

Whether visiting Glendalough on a day trip or taking a few days in the region, there are many nearby attractions on offer.

You can head straight across to the Wicklow coast to enjoy some of Ireland’s best beaches including the spectacular Brittas Bay – swimming is not allowed in the Glendalough lakes for safety reasons.

Or enjoy the hills and valleys of Wicklow by horseback with one of several equestrian centres around the county, while anglers can savour a spot of fishing along the river in Avonmore, Avoca and Aughrim.

Golfers are also spoilt for choice in the region with some of Ireland’s best championship courses nearby including Druids Glen, the European Club and Powerscourt.

For a great family day out with the kids, pay a visit to the Clara Lara outdoor adventure park, which is located close to Glendalough, where a wide range of outdoor activities are on offer, including canoeing, water slides, Tarzan swings and rope bridges.

And if you’re quite happy to take in the beauty of Ireland’s Garden County from the comfort and warmth of your car, then indulge in a feast for the senses with a stunning scenic drive through the Sally Gap or the Wicklow Gap.