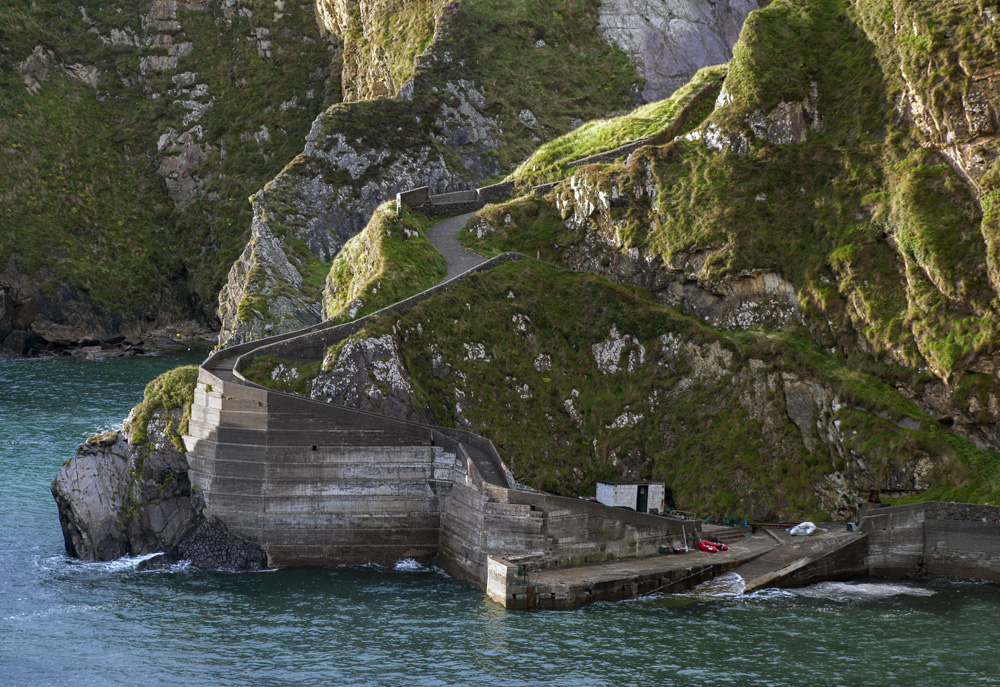 Strike out from Tralee, and discover five impeccable peninsulas – Dingle, Iveragh, Beara, Sheep and Mizen – each with its own quirky identity. From the ancient and ethereal beauty of the Ring of Kerry, to the roaring seas of Mizen Head in Cork, experience that edge-of-the-world feeling along this untamed stretch of coastline.

Day One
Start from Tralee, and seek out Dingle amongst the immaculate beaches and craggy cliffs of the Dingle Peninsula.

Take a town like Tralee
On the northern neck of the Dingle Peninsula, Tralee is everything you imagine a thriving country town to be. But it also includes the eye-catching Blennerville Windmill. It was at this port that people bade farewell to Ireland during the Great Famine, voyaging to the New World in the mid-19th century. It’s also a town that embraces tradition: catch a show at Siamsa Tíre, Ireland’s National Folk Theatre, or time your trip for the utterly unique Rose of Tralee International Festival every August.
IF YOU HAVE MORE TIME
Get lost in thought by the still waters of Lough Gill in Castlegregory, or walk the miles of unspoilt beach on the Maharees Tombolo.

Two towns overlooking Brandon Bay
Fáilte and welcome…this is a Gaeltacht (Irish-speaking) area, but don’t rush for the dictionary. Around the towns of Brandon and Cloghane, everyone speaks English, too. In the shadow of Mount Brandon, one of Ireland’s highest peaks, this is true rural Ireland, with stone cottages and pretty harbours creating a picture postcard affair. Stroll around here, and the heather-covered highlands rolling down to the waters are your just reward.

IF YOU HAVE MORE TIME
Nearby, take a moment to reflect at the tiny 7th century Gallarus Oratory, set against the weather-beaten hills of Ballydavid.

A literary legacy from the shores of Dunquin
Face out from the steep, narrow and twisting lane leading down to Dunquin Harbour, and the only thing between you and America are the Blasket Islands. Their most famous resident was author Peig Sayers, whose marriage resulted in her moving to this “lonely rock in the middle of the great sea”. Uninhabited since 1953, the Blaskets are best viewed from Dunquin – although you’ll often find yourself sharing the path with a farmer’s flock of sheep. Ferries leave from here, and from nearby Ventry.

The beating heart of the peninsula
Famous residents of this picturesque town include Fungie the Dolphin, and boat trips to see him are legendary. Dine out on the freshest of shellfish in places like The Chart House, and perhaps raise a toast to your fine adventure with Dingle’s own whiskey, gin or vodka from the Dingle Distillery, before asking the locals to teach you “cúpla focáil” (a few words) in Irish to take home. After all, this is still Gaeltacht territory!

COME AT FESTIVAL TIME
Make plans for the Dingle International Film Festival (March), a four-day extravaganza that celebrates all things film and animation.

Day Two
Traverse the Iveragh Peninsula in the shadow of Ireland’s highest mountains, Macgillycuddy’s Reeks, towards the stark beauty of the Skellig Islands.

Travel a mile (or three) on an Inch
As the waves of the Atlantic lap against your feet, take a moment for yourself and relax on Inch Beach. Only then will you understand why this stretch of nature was chosen by David Lean as the beach location for Ryan’s Daughter, and why Playboy of the Western World was shot in its entirety here. All that fresh air will make you peckish, so tuck into the bar menu at Jack’s Coastguard in Cromane, Georgina Campbell’s Seafood Restaurant of the Year! Yum.

COME AT FESTIVAL TIME
Ever been to a festival where a goat is crowned king? Only in Killorglin at Puck Fair (August)!

The tower at the end of the world
Valentia Island is your target here, but you’ll soon be distracted by mind-blowing views. This is, after all, part of the Ring of Kerry. Wind your way along the sheer cliffs looking out over the ocean, towards the Bray Head Tower. Built during the Napoleonic War, the tower was used again during World War II, and it is here that you’ll see the word “ÉIRE” spelled out in stones: a signal to pilots that they were on the Irish coast. Peer out towards the stalwart Skellig Islands, and you might even catch a glimpse of a whale passing in the water below.

Day Three
Wind your way along the sea-weathered Iveragh Peninsula, through tiny villages, past pretty harbours and simply stunning scenery.

The stars in the ocean
Gaze out from the coast, and take in the Skelligs, sitting crouched in the roaring ocean. Most recently called home by Jedi knights (it was a key filming location for Star Wars: The Force Awakens) these islands were first occupied in the 6th century by monks who sought solitude and peace. The mind boggles at the challenges they must have faced, living in this incredible location. If you’re lucky enough to get to visit, climb the steep stone steps to the summit, where stark beehive huts cling to the rock and an overwhelming sense of calm prevails. Alternatively, take a boat ride around the islands, or visit The Skellig Experience in Valentia.

The gem of the West
Tucked away at the very end of the Iveragh Peninsula is the beautiful seaside village of Waterville, boasting miles of sandy beaches and views out into the glittering ocean. Famed as Charlie Chaplin’s favourite retreat, tales are told to this day of his fly-fishing skills (or rather, lack of them).

IF YOU HAVE MORE TIME
Mountains and water converge at the Waterville Golf Links, an absolute must-visit for any golfing fans.

To the manor born
Surrounded by swathes of forest, the ancestral home of Daniel “The Liberator” O’Connell Derrynane House deserves a stop to absorb its grandeur. Travel down the coast to another luxurious manor – Dromquinna Manor, which stands on 40 acres of wooded garden. After exploring, the Boathouse Bistro – housed in a boathouse dating from the 1800s – will satisfy any rumbling tummies.

Beauty knows no bounds at the cusp of two Rings
On the banks of the bay, the haven of tranquillity that is Kenmare sits perched between the Ring of Kerry and the Ring of Beara. Famed as a foodie destination, make sure to get to the farmers’ market on a Wednesday for superb artisan produce. The history of the town is tied up in elegance, with the main industry of lace having lent its riches to the town – pieces of Kenmare lace are owned by Queen Elizabeth II, and the Pope. The jewel of this area, though, lies just outside Kenmare. Ever wanted to see a majestic red deer up close? Visit Killarney National Park, and you might!

Day Four
As you arrive on the Beara Peninsula, and in the mighty County Cork, prepare for a magnificent journey where every step comes with an ancient tale.

A tale of two towns
Kenmare is more of an understated proposition than nearby Killarney, but this classy town has a knack for winning visitors’ hearts. Nestled at the mouth of Kenmare Bay, its collection of colourful shopfronts and luxury hotels is remarkable for a town of its size.

Ireland’s only cable car
Abandoned largely by humans, frequented only by sheep, Dursey Island waits to receive you – via Ireland’s only cable car. Maybe don’t look down while you’re making the crossing! Dursey itself is a place of utmost serenity – there’s no rush hour here, and the unmarked roads wind through the ruined cemetery and ancient standing stones, towards the wreck of the 200-year-old signal tower in the south.

IF YOU HAVE MORE TIME
Over 10,000 tons of quartz now make up the beach at Ballydonegan, pulverised over 200 years ago in the nearby copper mines.

Paradise in the sea
Glengarriff is the Beara Peninsula’s other gateway town. Translated from the Irish for “rugged glen”, it’s ensconced in ancient woodlands, and has been a tourist stop since Victorian times.The summertime buzz is infectious, there’s a tempting clutch of pubs, and Glengarriff also makes a great base for hiking in the Caha Mountains. If hiking isn’t your thing, try a gentler stroll like the ascent to Lady Bantry’s Lookout – leading to a stunning panorama of West Cork.

Dappled walkways, rare plant specimens, and glorious Italian gardens – Garinish Island is a jewel of beauty just off the Cork Coast, near Glengarriff. Splashes of colourful flowers and tangled woodland make the island feel like a place from a dream. As you chug back on the ferry, keep an eye out for the residents of Seal Rock, who love to splash and play in the waters around the island.

A walk on the wild side
Sheep’s Head is the smallest of the five peninsulas, but it packs in oodles of character. Lush greenery, abundant wildlife, tiny villages nestled along the coast – this is untamed Ireland. Stop at Ahakista, where the woodland meets the sea, and refuel at the Heron Gallery & Café – browse Annabel Langrish’s vibrant artwork while you’re there. If you’re feeling adventurous, strike out on the Sheep’s Head Way Looped Walk – there’s 150km of it, but even a short stretch offers stunning views of the ocean on both sides from the heather-covered Seefin Ridge.

IF YOU HAVE MORE TIME
Wander the pristine lawns of Bantry House, and explore this immaculate 17th century mansion. For more itinearies for this beautiful streTch of the Beara Peninsula.

Don’t look down
Amidst sea cliffs and the swirling ocean, Mizen Head reaches out into the Atlantic. To get there, you must cross the Mizen Head Bridge. The foaming waters below have often been described as hypnotic, so keep your wits about you! Climb to the signal station for unparalleled views of where land gives way to the rolling sea. Keep your eye out for Fastnet Rock, known as Ireland’s Teardrop, keeping a lonely watch amongst the waves. It was the last bit of Ireland emigrants saw before heading to the New World.

IF YOU HAVE MORE TIME
Enjoy rip-roaring summer nights of traditional music, and year-round delicious seafood at the Crookhaven Inn