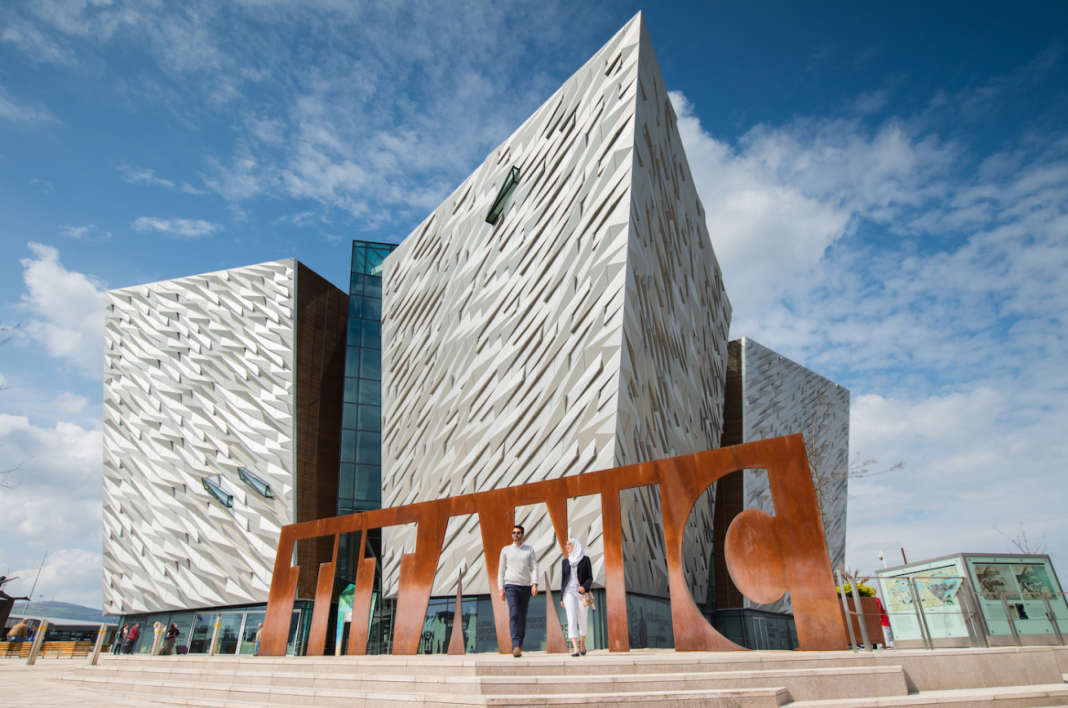 A special photographic exhibition has been launched to mark the 10th birthday of Titanic Belfast.

‘The People Who Built Titanic Belfast’ includes 123 photographs and illustrations telling the story of the iconic building from its inception and design to the structure being fitted and built.

On display at the Andrews Gallery at Titanic Belfast, the free exhibition includes pictures of the people who created the building, such as the late architect Eric Kuhne, who can be seen sketching and hand-drawing ideas for the design.

The exhibition is dedicated to the working men and women of Belfast, past and present, who helped to create both RMS Titanic and Titanic Belfast, the permanent home for her memory.

‘The People Who Built Titanic Belfast’ is part of a number of Titanic birthday events being organised to celebrate a decade of a building which has become one of Northern Ireland’s most iconic landmarks.

Events include a series of talks on the architectural design of Titanic Belfast and real-life stories of Titanic descendants, as well as hot air balloon and kite show displays, live music, face painting and a candlelight display on Titanic Slipways.

In the last ten years Titanic Belfast has welcomed more than six million visitors from over 145 countries, and among the venue’s many achievements in that time span was being crowned the World’s Leading Tourist Attraction in the 2016 World Travel Awards.

First opened on 31 March 2012, the spectacular building sits on the edge of Belfast Lough beside the original Harland & Wolff Drawing Offices, the Hamilton Graving Dock and the Titanic Slipways – the very places where the mighty RMS Titanic was designed, built and launched.

A must-see when visiting Belfast or anywhere in Northern Ireland, the iconic six-floor building features nine interpretive and interactive galleries and is the world’s largest Titanic visitor experience.

Indoors, the self-guided Titanic Experience uncovers the sights, sounds, smells and stories of the ship, as well as the people and city that made her.

Outside, a Discovery Tour reveals the hidden symbolism of the iconic building as you walk in the footsteps of the designers and shipbuilders who brought the ‘ship of dreams’ to life.

The world’s most authentic Titanic exhibition sits in the centre Belfast’s Titanic Quarter, a bustling destination within the city’s Maritime Mile. Everywhere around this iconic waterfront, you can feel and connect to the spirit of Titanic.

Throughout the Maritime Mile, Belfast’s rich maritime and industrial history is evident a wide range of attractions, exhibitions, historic buildings, public art and even a Glass of Thrones Trail, a series of six stained-glass installations which celebrate Northern Ireland as the home of Game of Thrones®.

Numerous self-guided or escorted walking, cycling, tram and boat tours of the Maritime Mile are available, and the area is packed with restaurants, bars and hotels, including the luxury Titanic Hotel.