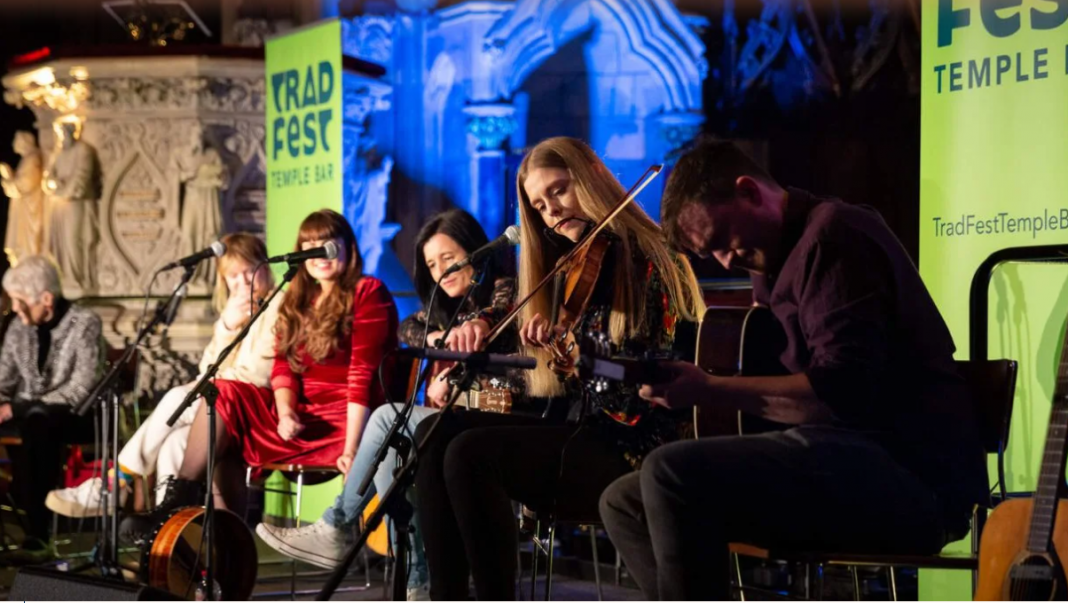 Every January TradFest Temple Bar fills the Dublin air with the uplifting sounds of bodhráns and banjos, fiddles and flutes. This year, the landmark traditional music festival runs from January 25-29, with a host of bars and performance spaces welcoming established and emerging musical talent from Ireland and beyond.

The mainstay of the festival is the busy calendar of sessions that take place in 10 venues throughout Temple Bar, but the biggest names on the bill will be performing in some of Dublin’s most distinctive landmarks, including St Patrick’s Cathedral and the National Museum of Ireland at Collins Barracks. Put them altogether and you’ve got an irresistible programme that celebrates Irish identity through music and performance.

Tradfest Temple Bar is the best place to experience live Irish music in January, so select a session or two and prepare to enjoy some of the finest toe-tapping and hand-clapping trad music around.

This magnificent 18th-century barracks, now the home of the National Museum – Decorative Arts & History, is an impressive setting for the lunchtime performances every day of TradFest Temple Bar 2023. Opening events is award-winning Sorcha Costello, one of Ireland’s most exciting fiddle players, who takes the stage at 1pm on January 25. Dublin-born, Spanish-based fiddler Conor Connolly will mesmerise on January 26 with his lively and eclectic playing style. Hot on the heels of the release of her debut album ‘Aistear’ in 2022, rising star Aisling Lyons will weave musical magic with her harp at lunchtime on January 27. And don’t miss Aidan Connolly, TG4’s Ceoltóir Óg na Bliana (Young Musician of the Year) for 2019. On Saturday 28 he’s set to take you on a musical journey with his uplifting button accordion.

St Patrick’s Cathedral kicks off Tradfest Temple Bar 2023 on January 25 from 7pm with Aoife Scott and Women of Note, a musical celebration of female artists from diverse backgrounds and cultures. January 26 is the turn of gifted soprano Eimear Quinn’s hypnotic voice to fill the cathedral, with Mercury Prize-winning Kate Rusby’s rescheduled performance from last year’s edition of the festival taking place the next night, January 27, with additional tickets on sale. Fans of Judy Collins can hear the Grammy award-winning singer-songwriter on the evening of January 28, as the legendary entertainer is joined by Blánid, a fresh new voice with haunting charm.

Mixing traditional Irish folk with some contemporary Irish rap, singer-songwriter Steo Wall performs at Dublin Castle on January 25, followed by rising star, folk singer and songwriter Dani Larkin the next night. Singer and musician Katie Theasby brings her golden voice to the Castle Hall on January 27, with unique quartet Navá set to dazzle with their original Persian-Irish fusion music on January 28. Four exciting acts in a beautiful and dramatic location.

The iconic Georgian St Stephen’s Church on Mount Street Crescent, whose unique ‘pepper canister’ spire gives the nickname by which it is more commonly known, is an atmospheric venue for an impressive line-up of intimate TradFest gigs. With four different acts daily, from 1pm right through to 7.30pm, you’ll find an imaginative and engaging line-up to enjoy. Highlights include Matt Molloy & Seán Keane of The Chieftains on January 25, Lorcán Mac Mathúna setting John Milton’s ‘Paradise Lost’ to music on January 28 and multi-award winning traditional singer and musician Muireann Nic Amhlaoibh, whose lilting Kerry vocals will fill this elegant auditorium on January 29. Other performers include folk singer Lisa Lambe and guests on January 26 and The Ocelots, Wexford-born and Leipzig-based, on January 29.

On January 26 one of Ireland’s best-loved traditional bands, Dervish, will perform their 2018 album The Great Irish Song Book with special guests, including Eddie Reader and Cara Dillon. Next evening, pack your dancing shoes for Féile Kíla, where trad fusion group Kíla will serve up their blend of high energy music (and global instrument collection). The next night, Mairéad Ní Mhaonaigh of Altan presents Women in Trad and Folk with Mary Chapin Carpenter, T with the Maggies, Sí Fiddlers, BRÍDÍN. That’s three exciting nights on the South Circular Road venue.

With a pinch of Americana and a dash of Scottish folk music, high-energy Irish trad band Jig Jam promise to get your feet stomping at The Grand Social in Dublin 1 on January 26. Two nights later it’s the turn of Moxie, whose January 28 show will see this fun alternative folk band showcase a new musical departure from their traditional Irish music roots.

Fans of the fiddle won’t want to miss DeDannan legend Frankie Gavin, who joins forces with fiddle player Catherine McHugh in the intimate Chapel at Swords Castle in North Dublin at lunchtime on Saturday January 28. Later that afternoon, actor Stephen Rea will be joined by a host of acclaimed Irish musicians for Saíocht, an exciting and thoughtful exploration of the artistic relationship between the Irish literary tradition and Irish trad music.

The magnificent Great Hall at Malahide Castle in North Dublin plays host to two special TradFest events over the course of the festival. On Sunday, January 29, critically acclaimed Galwegian songwriter Niamh Regan will raise the roof here with her distinctive melodies. She follows on from Saturday night’s Saíocht with Stephen Rea and guests, which is already sold out (but there are tickets still available for the performance at Swords Castle; see above).

Intimate, informal and always great fun, Smithwicks Sessions are the lifeblood of Tradfest Temple Bar and take place every day throughout the festival, filling Temple Bar’s pubs and venues with high energy craic agus ceol (fun and music). Kicking off at up to ten different venues daily, these lively afternoon and early evening gigs are free events and always a festival highlight.

Offering an eclectic mix of bands and singers, Paddy Casey and his guitar will be busiest, performing rousing sessions across four days at different locations, including The Porter House on January 25 and The Temple Bar on January 29. Stockton’s Wing will be spreading smiles at three venues, including Gogarty’s on January 27, with high energy acts like The Kilkennys, Ukelele Tuesdays and SuperCéilí all bringing their jam to Temple Bar throughout the week. Week-night sessions begin at 6pm with Saturday sessions at 3pm and Sundays sessions at 4pm.

This year, the festival is also showcasing a couple of films as part of Tradfringe Sessions, including Job of Songs, a documentary on how music helps communities deal with the challenges of modernity; and O’Donohue’s Opera, a 1965 film featuring The Dubliners that was completed in 1998. Both are showing in the Irish Film Institute on Eustace Street. Collins Barracks is also hosting Music Therapy Through Trad, a 45-minute session led by music therapist and percussionist Tommy Hayes that mixes music therapy and guided relaxation.

The sessions are open to everyone and are also part of the programme of Tradkids, which include three different events at the Ark in Temple Bar: Tiny Trad, a music session for younger ear; and two felt-making classes, Fabulous Felt and A Bowl Full of Wishes.

Niall Gibbons to step down from Tourism Ireland after 21 years  

Belfast in top 10 most sustainable destinations

Niall Gibbons to step down from Tourism Ireland after 21 years  

Belfast in top 10 most sustainable destinations

Destination Ireland Guide - 4 January 2023 0
Bursting with top-class experiences to satisfy every interest, Northern Ireland always has something new to offer. Delve into history, learn some Celtic skills, commune with...

Go off the beaten track in Ireland’s Hidden Heartlands

Go off the beaten track in Ireland’s Hidden Heartlands