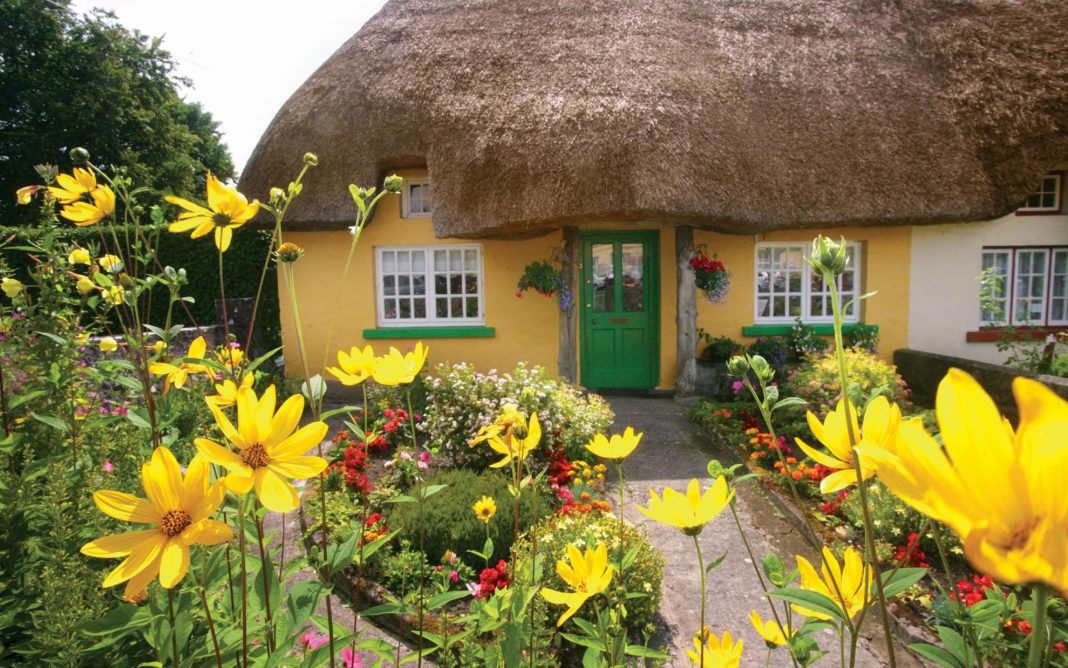 The motorway from Dublin to Limerick doesn’t actually take you to the Treaty City but continues on further into the south-west, eventually running out of government money about 20 kilometres south of the city.

Traffic slows and builds just ahead of your arrival into the historic heritage town of Adare. And while the rush-hour traffic allows you to enjoy the rows of thatched-roof cottages and ancient abbeys which run the length of the main street of the village, it really is worth parking the car and enjoying a few hours or an overnight stay in this self-titled ‘Ireland’s Prettiest Village’.

Built upon the banks of the River Maigue, Adare dates back to early Norman times and has been home to the Earls of Dunraven for over three centuries.

The Heritage Centre on the main street will point you in the right direction when planning your day around the town and also organises trips to one of Adare’s top attractions, Desmond Castle.

The castle tour, which runs throughout the summer, takes you down by the riverside to Desmond Castle, which dates back to the latter years of the 12th century.

The castle, which is one of the few remaining authentic Norman castles in Europe, was built by the O’Donovans before coming into the possession of the FitzGerald family.

Adjacent to the castle, you’ll find the magnificent Adare Manor and a ramble through the extensive woodlands takes you along a very scenic trail around the grounds and down to the finely manicured gardens, which present the magnificent manor house.

Along the route, you’ll pass along the periphery of the hotel’s championship golf course, which hosted the Irish Open in recent years. You will also spot the ruins of an old Franciscan friary, built by Thomas Fitz-Maurice, the Seventh Earl of Kildare, which dates back to the middle of the 15th century.

Inside the five-star resort, an hour or two will be well spent enjoying the sense of history and grandeur in the manor house, having a drink in the bar or a spot of afternoon tea.

Leaving the grounds of Adare Manor, you can enjoy a ramble along the main street where the ‘prettiest village’ moniker can be justified as you pass quaint craft shops, thatched roof cottages and boutique designer outlets.

The Trinitarian Abbey, which dates back to 1230, is also located on Adare’s main street. The abbey is the only monastery of the Trinitarian Order in Ireland and their purpose was to rescue hostages taken in the Holy Lands during the Crusades. All their northern European monasteries were set up to recruit monks and collect ransom money, as well as serving as a hospital for rescued captives.

The monastery became known as the White Abbey due to the white habits that the monks dressed in, while pigeon proved to be one of the main dishes as the birds nested in the adjoining stone dovecot.

The abbey, which is now the main Catholic church in Adare, also boasts some impressive stained glass windows, one of which depicts a monk in chains about to redeem a hostage.

The remaining heritage site in Adare is the Augustine Priory, which dates back to 1316 and was founded by John FitzThomas FitzGerald, otherwise known as the First Earl of Kildare. The priory was overtaken in the 17th century and given to the local Church of Ireland congregation in the 19th century.

While it is history and heritage that takes you to Adare, the village’s growing gastronomy reputation will make you hang around for a night or two, with a range of excellent dining options on offer.

So back to Adare Manor and a gourmet evening meal in the fine dining Oakroom Restaurant for the signature eight-course tasting menu.

Pumpkin soup was the first of the eight. It was followed by a goat’s cheese tart, roasted loin of rabbit and a perfect pan-fried fillet of sea bass with lentils. After a short interlude there was a palate-cleansing berry sorbet and an excellent cut of prime beef to finish off the savoury section.

What can only be described as a pre-dessert (I’m sure there’s a more sophisticated culinary term) arrived in a shot glass housing a jelly base with a frothy filling, which may or may not have had some sort of meringue infusion – the taste buds were playing tricks on me at this stage.

The main dessert was another crafty creation, including crème caramel and chocolate mousse layers, which proved the perfect finale. The rich red Rioja just about lasted throughout the food fest.

Some top class dining options in the village are also available with the Blue Door offering rustic style in a cosy atmosphere with excellent food and service. Most locals will recommend the neighbouring White Sage restaurant, which was fully booked when I enquired, so call ahead to avoid disappointment.

Other options include the Wild Geese restaurant, the Dunraven Arms or the Dovecot restaurant. Aunty Lena’s is the main pub in the village and offers a strong bar menu, which is a great lunchtime option or a more relaxed evening option – it’s worth popping in, if only to taste the potato skins appetiser.

And Aunty Lena’s also advertises that it is the ‘Last Watering Hole Until Dublin’, but how long before Ireland’s ever-expanding road network creates a bypass around this pretty little village?

I stayed at the spectacular five-star Adare Manor, where the Gourmet Tasting Menu Offer is available from €250pp for two-nights’ accommodation, with breakfast and one tasting menu evening meal.

Other options in the village include the four-star Dunraven Arms Hotel or the three-star Woodlands House Hotel.

For more information about Adare Village, visit: www.discoverireland.ie or www.adarevillage.com