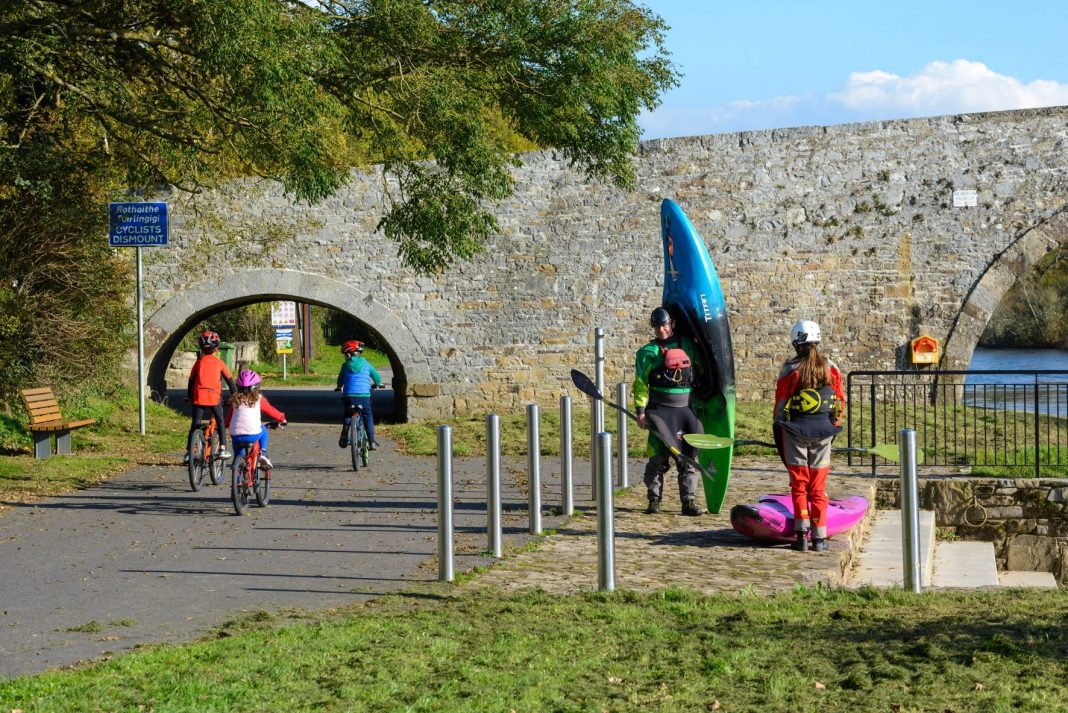 Tipperary Tourism invites you to experience a blissful adventure along the Suir Blueway Tipperary this August. With 53km of stunning scenery and hidden historical gems which you can explore by foot, on bikes or over water, there is a piece of Blueway bliss to suit everyone.

With many visitors looking for low-cost, experience-rich travel options, The Suir Blueway is the perfect opportunity for all the family to sample Ireland’s beautiful countryside and rich cultural heritage.

The Suir Blueway has 21km of walking and cycling trail from Carrick-on-Suir to Clonmel, and a further 32km of the waterway to canoe and kayak as far as Cahir.

With Carrick-on-Suir being the hometown of Sean Kelly and Sam Bennett, many consider this area to be Ireland’s spiritual home of cycling. This off-road route shouldn’t disappoint the experienced cyclist. Running through the rich valley of the River Suir and the surrounding pasturelands of the Golden Vale, the trail provides wonderful views of some of Ireland’s most beautiful countryside.

Whatever way you choose to travel the Blueway, you’ll get close to centuries old castles, tower houses and churches and discover their history of drama, romance, intrigue and deadly rivalries all set against a world of natural wonders in Ireland’s Ancient East.

Just 2 hours from Dublin, and 1 hour from Cork, Suir Blueway Tipperary has something for all ages and interests. Why not stay a while and sample the sensational local food produce and arts and crafts which is matched only by the local hospitality.

Beginning in Carrick on Suir, there are many amenities and sites to see, with a wide variety of cafes, restaurants, shops and a popular summer spot, Treacy’s Blueway Bike Hire open 7 days a week. There are also stunning tourist attractions such as St. Mollerans Church, the Old Bridge and Ormond Castle. Once joined to an earlier medieval riverside castle, Ormond Castle is the finest example of an Elizabethan manor house in Ireland. Thomas, 10th Earl of Ormond, built it in 1565 in honour of his distant cousin Queen Elizabeth. The castle is open to the public with guided tours available and reasonably priced with adult tickets at €5.00 and a child and student tickets at €3.00.

As you make your way along the meandering trail, you will arrive at a beautiful village called Kilsheelan. Once you notice Poulakerry Tower House you have arrived. A stronghold of the Butler Fitzwilliams family, the 4/5 storey tower house guarded a crossing over the River Suir, 100 metres to the south. The castle passed from William Butler to his sons Robert and Theobald Butler in the 16th century. The Tower House was restored in 1970 and is used as a private residence ever since.

Once you have reached Kilsheelan Bridge you are in the heart of the village often used as a resting point. There is a local shop, café and pub restaurant available as you take a well-deserved rest. Back on the Blueway, just past the bridge is Gurteen de la Poer Castle, situated on the south bank of the River Suir. Construction began in 1863 and was completed in 1866 for the de la Poers, an Anglo-Norman family. In 1998, the Austrian Artist Gottfried Helnwein purchased the spectacular Gurteen Castle and began restoration work on the castle and gardens. Helnwein and his family reside in the castle and the holding remains private.

Next stop is the bustling town of Clonmel. In the 17th century, County Tipperary was a palatinate, ruled by James Butler, duke of Ormond. When the duke decided he needed a new courthouse, he built one in the heart of Clonmel. Later, when it was used as a barracks, it became known as the Main Guard. Guarding the western entrance to the town, at the end of O’Connell St, is the impressive West Gate. The current structure dates from 1831.

Although the walkway ends in Clonmel the water activities kick into place as you continue along the River Suir towards Cahir. The walkway commences again with a stunning 4km walk from the Swiss Cottage back to the heart of Cahir town centre and the castle grounds.

The Swiss Cottage was built in the early 1800s by Richard Butler, 1st Earl of Glengall. Originally, simply known as “The Cottage” it appears to have acquired its present name because it was thought to resemble an Alpine cottage. Inside, there is a graceful spiral staircase and some exquisitely decorated rooms. Tours of the cottage are open to the public 7 days a week.

Standing proudly on a rocky island on the River Suir, Cahir Castle is one of Ireland’s largest and best-preserved castles. Built in the thirteenth century it served as the stronghold of the powerful Butler family. At the time of building, Cahir Castle was at the cutting edge of defensive castle design and much of the original structure remains. The castle has been used in recent years for several Hollywood movies such as Excalibur, The Tudors and recently The Last Duel, so it’s no surprise that Cahir Castle was named Europe’s favourite filming location in 2021.

A trip along the Blueway is the ideal way to see the best of Tipperary at your own pace. For further information, maps, sample itineraries and places to eat, stay and play, visit www.tipperary.ie