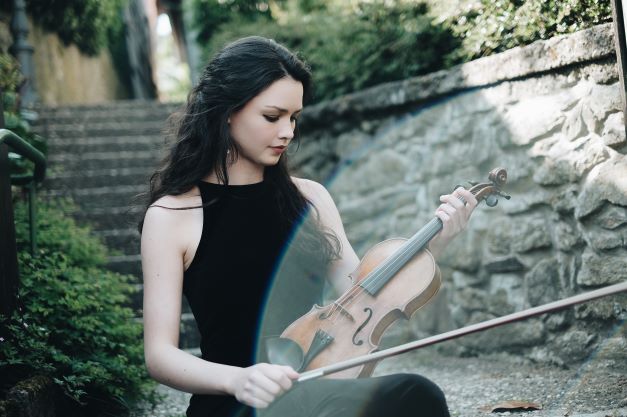 The Festival’s new ‘Winter Weekend’ promises to condense the wonderful music and warm Wicklow hospitality that audiences have come to expect from the summer Festival, into a single November weekend at Russborough House.

The West Wicklow Festival ‘Winter Weekend’ begins on Friday 12th November 8pm, with a collaboration between celebrated Irish violinist Mairéad Hickey and Wicklow-born Fiachra Garvey, a multi award-winning pianist and the Festival’s Artistic Director. Together they will present four extraordinary masterpieces for violin and piano, taking their audience from the noble intensity of Brahms’ First Violin Sonata to the contrasting darkness and light in Debussy’s swansong Sonata. Their programme also includes “a quarter million miles from the moon” by Irish composer Deirdre McKay and the irresistible drama of Richard Strauss’ Violin Sonata.

On Saturday 13th November 8pm, Latvian sisters Kristine and Margarita Balanas, a tour de force violin and cello duo, will give their debut Irish performance. Two of the most exciting and versatile artists of their generation, they are known for their distinguished artistry and mesmerising stage presence and have dazzled audiences all over the world in venues such as Carnegie Hall, Laeiszhalle Hamburg, Foundation Louis Vuitton, Royal Festival Hall, Walt Disney Concert Hall and the Philharmonie, Berlin. Their concert will feature music by JS Bach, Ravel, Handel, Vivaldi, fellow Latvian composer Pēteris Vasks and a newly arranged commission by Irish composer Anne-Marie O’Farrell called A Russborough Diversion.

Leading Irish mezzo-soprano Sharon Carty and pianist Gary Beecher bring the West Wicklow Festival ‘Winter Weekend’ to a close on Sunday 14th November 3pm. The duo will present a programme of pure beauty featuring songs by Schubert, Debussy, Grieg as well as some well-known and loved Irish and English songs – the perfect way to round off the Festival and a Sunday afternoon at Russborough!

West Wicklow Festival Founder and Artistic Director Fiachra Garvey commented: “I’m delighted to announce the West Wicklow Festival‘s inaugural ‘Winter Weekend’, taking place from the 12th-14th November 2021 at our beloved musical home, Russborough. The Festival team and I are so excited to finally welcome everyone back to live performances. With that in mind, rather than waiting until our next flagship festival in May 2022, we’re thrilled to present an additional musical treat for our audiences this November with 3 fabulous concerts. We invite you to come and support live music again in the most glorious and inspiring of settings.”

For further information about the West Wicklow Festival and to book tickets, please visit westwicklowfestival.com

The West Wicklow Festival is funded by the Arts Council and supported by Wicklow Arts Office.

Celebrated for her captivating expression, soaring tone and fearless virtuosity, Irish violinist Mairéad Hickey’s natural ability to communicate with beauty and integrity has entranced audiences worldwide. Mairéad will perform with Wicklow-born Fiachra Garvey, a multi award-winning pianist and the Festival’s Artistic Director, who is widely recognised for the infectious enthusiasm of his masterful performances.

Together they will present four extraordinary masterpieces for violin and piano, taking us from the noble intensity of Brahms’ First Violin Sonata to the contrasting darkness and light in Debussy’s swansong Sonata. In the second half of the programme, Deirdre McKay’s “a quarter million miles from the moon”, which takes its inspiration from the immense quietude of space, is the calm before the irresistible drama of Richard Strauss.

Deirdre McKay “a quarter million miles from the moon”

Latvian sisters Kristīne and Margarita Balanas are two of the most exciting and versatile artists of their generation. Known for their distinguished artistry and mesmerising stage presence, they have dazzled audiences all over the world in venues such as Carnegie Hall, Laeiszhalle Hamburg, Foundation Louis Vuitton, Royal Festival Hall, Walt Disney Concert Hall and the Philharmonie, Berlin.

Kristīne and Margarita have selected an alluring programme for their West Wicklow Festival performance. Including Bach’s famously visceral Cello Suite No. 1, Handel’s melodious Passacaglia, excerpts from Vivaldi’s Four Seasons, Ravel’s stunning Sonata, and the Latvian composer Pēteris Vasks’ shimmering Castillo Interior, their performance will combine some of the most virtuosic and life-affirming works in the repertoire. We are especially delighted that the Balanas sisters will perform the world premiere of A Russborough Diversion, a new arrangement by Anne-Marie O Farrell, commissioned by the Festival.

Prelude, Sarabande and Courante from Suite No.1 in G major for cello, BWV 1007

Ravel Sonata for violin and cello

Vivaldi ‘Summer’ from The Four Seasons

Kildare mezzo-soprano Sharon Carty is admired by audiences for her musicality and intelligence, as well as for the warmth, clarity and agility of her voice. Sharon will perform with the acclaimed Cork pianist Gary Beecher, who in 2019 was awarded First Prize at the prestigious International Nadia and Lili Boulanger Voice-Piano Competition in Paris.

Schubert composed more than 600 songs in his short life, each a mirror to the human experience. Gary and Sharon will perform a selection of six of them, beginning with ‘Viola’, a ballad about a lovesick snowdrop, and ending with ‘An die Musik’, a hymn to the art of music, and one of Schubert’s best-known songs. Also featured are Chansons de Bilitis, Debussy’s setting of collection of poems by his contemporary Pierre Louÿs, Grieg’s Six Songs, offering a distinctly Norwegian take on German Romanticism, and closer to home, a selection of songs by English and Irish composers.

Joan Trimble My grief on the sea

48 HOURS… ON THE CLARE COAST

48 HOURS… ON THE CLARE COAST

Destination Ireland Guide - 7 September 2021 0
One of Ireland's most famous hotels is celebrating its 50th anniversary - and how it withstood the Troubles to emerge as an iconic beacon of...