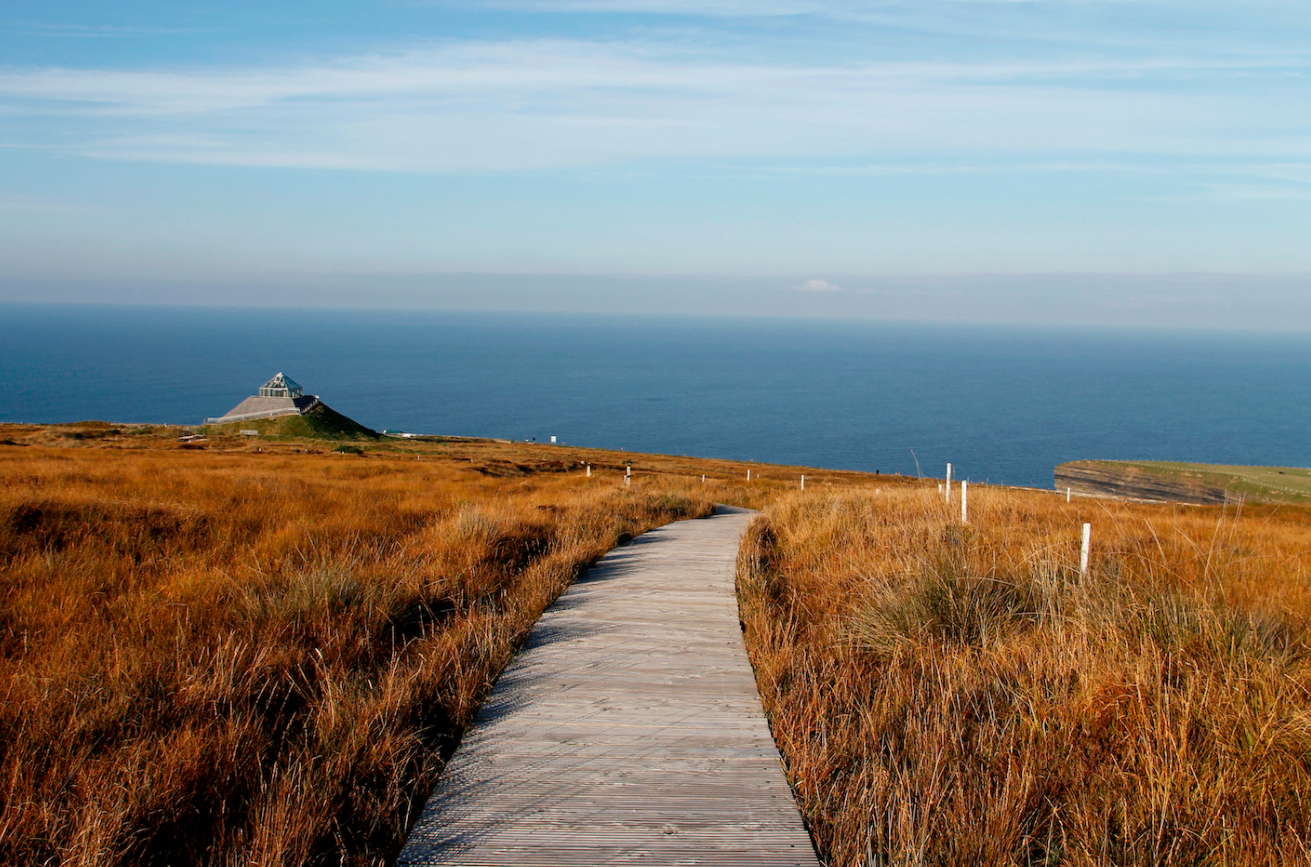 The visitor centre at one of the world’s most extensive Stone Age monuments on Ireland’s Wild Atlantic Way has re-opened after a major facelift.

The unique and extensive Céide Fields in northern County Mayo is a Neolithic archaeological site of international significance, celebrated for its complex and extensive remains of ancient field systems and habitations.

At a glance, the site seems like a normal Irish blanket bog, but this wild and incredible place is home to one of the oldest stone-walled field systems in the world.

Hidden beneath the blanket of bog, the Céide Fields is the most extensive Stone Age monument in the world. It is a “landscape fossilised”, as poet Seamus Heaney described it in Belderg, of stone-walled fields, dwelling houses and megalithic monuments. There is nowhere else in the world with such evidence of how the first farmers farmed the land; only at the Céide Fields can visitors get a unique insight into the sophistication of the land management of Ireland’s Neolithic farming ancestors almost 6,000 years ago.

The transformative upgrade to the Céide Fields Visitor Centre is designed to transport visitors back in time to see one of Ireland’s oldest monuments in a fresh new light.

The upgrade includes state-of-the-art technology that provides a new and immersive virtual journey spanning thousands of years, from the hunter-gatherers who first appeared in the area to the present day.

The revamped exhibition and interpretation centre now also features artist reconstructions, video, replica artefacts and other different techniques to significantly enhance the experience of the site, while the dramatic 4,000-year-old pine tree that was unearthed from nearby bogland is retained.

The visitor centre also unpacks the amazing geology, archaeology, botany and wildlife of the unique Neolithic landscape and lets you investigate why bogs are formed and the huge influence a subtle change in climate can bring about.

Guided walking tours of the site are available, and there is a tearoom for refreshments.

The award-winning visitor centre is set against the stunning scenery of north County Mayo. Rugged cliffs, rust-coloured boglands, some of the most dramatic rock formations in Ireland and the majestic ocean views make a visit here something special.

A viewing platform has been erected beside the visitor centre among the 110m-high cliffs, offering epic panoramas. Standing on the cliffside, with the expanse of the Atlantic Ocean stretching into the horizon, feels like standing at the edge of the world.

When at the Stone Age site, a tour along the Céide Coast, regarded as one of the wildest parts of the Wild Atlantic Way, is well recommended, while another great way to delve into the Céide Fields story is to head to the nearby Belderrig Valley Experience.

This fascinating walk unpacks the science, history and folklore that underpin the archaeological marvel. The tour is run by Professor Séamus Caulfield, who has close ties to the Céide Fields site, as it was his father who discovered the remains of the stone walls back in 1934.