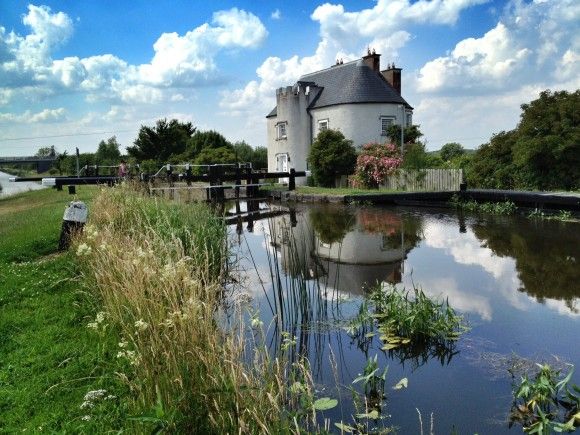 One of Ireland’s most popular tourist attractions One of Ireland’s most popular tourist attractions and significant historic sites, the Clonmacnoise monastic site dates back to the sixth century and to the Land of Saints and Scholars. The site boasts three high crosses, a cathedral, seven churches and two round towers, and was founded in 548-9 by Saint Ciarán. It was to prove a great centre of learning, while many manuscripts, including the Annals of Tighernach (11th century) and the book of the Dun Cow (12th century), were written here. Clonmacnoise was the “Beacon of Light” through the dark ages, which allowed Christianity and civilisation to prosper again in Europe. As a city of learning, it was the most eminent university in Europe.

With a wide variety of stunning walking trails to cater for all tastes and abilities, the Slieve Bloom Mountains nature reserve is one of the Midlands’ best-kept secrets. While not the most challenging of mountain ranges in Ireland, the Arderin is the highest point at only 527 metres. Walking trails are available from Kinnitty, Lough Boora, Cadamstown and Clonaslee. Spectacular panoramas of Offaly and the central plains of Ireland are to be savoured from the slopes of what are often considered Europe’s oldest mountains.

The town of Tullamore enjoyed prosperity after the Grand Canal linked Offaly to the port of Dublin in 1798. Tullamore then became world famous, following the success of Tullamore Dew whiskey and its offspring, the liqueur Irish Mist. The old distillery is now a heritage centre, located in the original 1897 bonded warehouse, with audio and visual presentations taking you through the recreated working stations of the old distillery, such as the malting, boiling or cooperage areas. At the end of the tour enjoy a complimentary dram of Tullamore Dew whiskey or Irish Mist liqueur. Elsewhere, the Durrow High Cross is located just outside Tullamore.

Experience some of Ireland’s award-winning gardensExperience some of Ireland’s award-winning gardens, set in the beautiful Georgian heritage town of Birr. Birr Castle Demesne is home to an impressive plant collection with rare species from around the world, including over 40 champion trees of Britain and Ireland. Birr Castle was once a hub of scientific discovery and innovation and the interactive museum reveals the wonders of early photography, engineering and astronomy. The Earl of Rosse built a telescope here in the 1840s, which remained the largest in the world for over 70 years and can be viewed at the castle.

The beautiful landscape of Lough Boora Parklands offers a unique visitor experience as you roam the scenic walkways and meadows, while relaxing in a peaceful, natural environment. Cycling, angling, bird-watching, photography and various walking routes are available and the visitors’ pavilion provides information about Lough Boora parklands’ extraordinary and unique flora and fauna, which date back 9,000 years. The parklands have three main walking routes: the farmland walk, the Mesolithic walk and the sculpture walk. They are all flat, easy walks and vary in length.

A fantastic way to explore the countyOffaly’s midland location welcomes the broad, majestic River Shannon, offering a fantastic way to explore the county. The town of Banagher boasts a marina for river cruisers and water sport facilities, which replaces the old defensive importance of the town, reflected in the 17th-century Martello tower fortification, bridgehead and batteries. Banagher is located in the middle of the Callows, a great area of water meadows, bounded by the reed beds on the banks of the River Shannon.

Kinnitty Castle dates back to 1209Sitting at the foothills of the Slieve Bloom Mountains, Kinnitty Castle dates back to 1209 and is seated on 650 acres of parkland, including 60 acres of rolling lawns. Now renovated as a luxury hotel, you can experience the lavish medieval revival castle, drenched in original features and heritage colours, while the 13th-century regal atmosphere remains. Wander through the fine settings of the Library Bar, the Sli Dala Restaurant and the Drawing Room.

Visit the remains of an extinct volcano at Croghan Hill. Though only 232m high, Croghan Hill commands extensive views of the surrounding midland counties across the flat, low-lying expanse of the Bog of Allen. The bog was also the resting place of Old Croghan Man, a well-preserved body dating back over 2000 years and which was found in 2003. Irish saint Mary of the Gael or St Bridget is also said to have been born in the vicinity of Croghan Hill in the fifth century.

This unique, purpose-built village is a noted angling centre, as it is where the Shannon, Brosna and Grand Canal meet, with salmon, perch and pike all in plentiful supply. East of Shannon Harbour village is the 16th-century Clonony Castle Tower House. It is a birdwatcher’s paradise with many rare birds visiting and thriving in the Shannon Callows. Bullock Island is only a short walk from the 36th or lower lock and is the last bastion of the endangered corncrake, once one of the most common European birds. The nearby town of Shannonbridge boasts a lively nightlife and regular traditional music sessions. Artillery fortifications dating back to the Napoleonic era are also to be found in the area.

Considered to be Ireland’s finest gothic revival castle, Charleville Castle was built between 1798 and 1810 and was renowned architect Francis Johnston’s masterpiece. Johnston also designed the GPO in Dublin, while the castle’s massive dining room was designed by William Morris. The castle is reputed to be haunted by a little girl named Harriet, youngest daughter of the third Earl of Charleville, who died tragically on the main staircase of the building at the age of eight in April 1861.