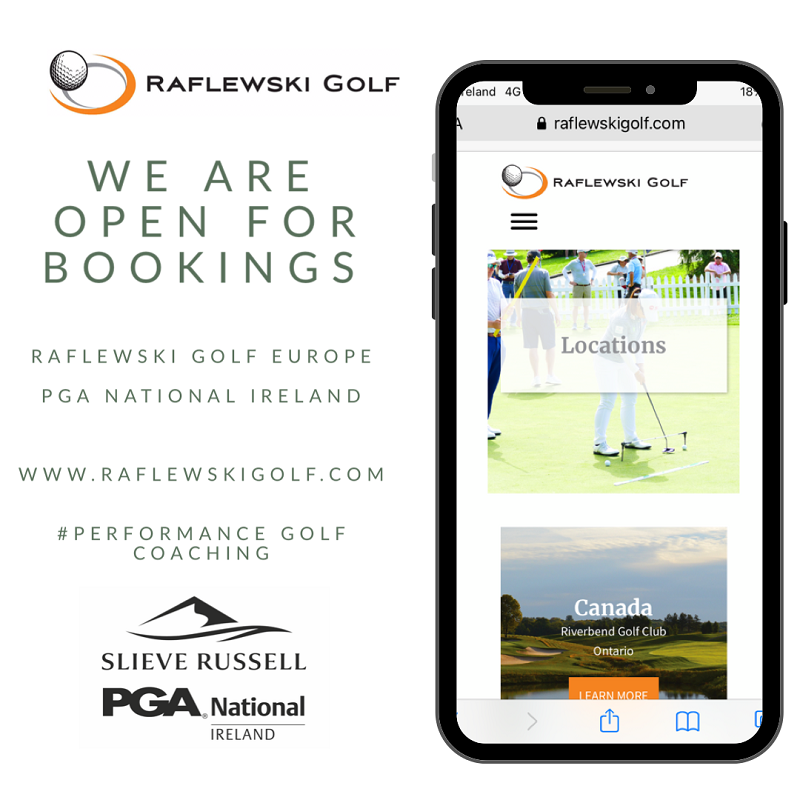 A first of its kind in Ireland, the new Raflewski Performance Academy in Ballyconnell, Co.Cavan, features a state-of-the-art performance studio and is being led by PGA National Ireland’s head professional Gordon Smyth.

Raflewski – who is based in Canada but grew up in Omagh, Northern Ireland – has worked with 65 of the game’s best players across the LPGA and PGA Tours, including three women’s number ones over the past three years, and golfers across Ireland can improve their games using the same methods that have made the coach such a global success.

Smyth is a long-time friend of Raflewski’s and, when the chance to work with one of the world’s leading performance coaches arose, it was an opportunity that he didn’t have to think twice about taking.
“As a coach, to be able to go on Tour (PGA & LPGA) and also be mentored from someone like Gareth is incredible,” said Smyth.

“His stable of stars, both on the PGA Tour and the LPGA Tour boasts an unbelievable pool of talent from Major winners to world number ones, so to be able attend events and shadow what he’s doing is phenomenal for me and hopefully in turn, it will be great for Irish golf too.”

With Raflewski’s players having amassed over $10 million collectively in 2019 alone, his coaching skills are certainly a formula which is gaining worldwide attention.

Players using the Raflewski Performance Academy will be able to benefit from some of the latest technology in golf, from the GC Quad which should help players dial-in their wedge game like never before, to cutting edge systems like the Sam Putt Lab, Capto 3D Putting, Swing Catalyst and a bespoke ‘Well Putt’ indoor green.

From the studio, golfers will then take their new-found information to the multiple short-game areas on-site at PGA National Ireland, training their skills with drills and repetitions before putting this practice into play on the golf course.

Smyth added: “We initially planned to launch the new academy in the spring but Covid-19 brought a halt to those plans. A proposed extended stay in Canada in April was cancelled but near daily Zoom meetings with one of the world’s best have still been hugely beneficial. I’ve been like a sponge, absorbing as much information as possible from Gareth, and I can’t wait to pass on the skills and knowledge of one of the most respected coaches in world golf to a new golfing audience.”