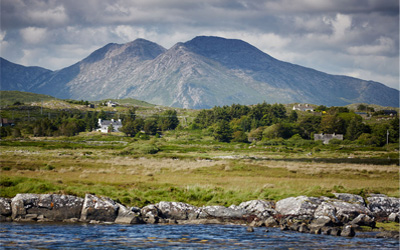 The four-week series will be hosted by television presenter Kathryn Thomas and will showcase regions across Ireland, packed with inspirational and informative ideas for short breaks this summer.

‘No Place Like Home’ will visit a number of locations across Ireland, telling stories that explore the hidden and not so hidden treasures that the regions have to offer. Each 30-minute programme will provide insights into how the tourism industry is adapting to ensure that holidaying at home is the best and safest choice, while reminding viewers of the many unique experiences on offer.

“This series will give RTÉ One viewers some great ideas about places to go and things to do and prove, as Dorothy said in the Wizard of Oz, there’s ‘No Place Like Home’!”

Alison Levins, Head of Marketing at Fáilte Ireland said: “We’re delighted to be collaborating with RTÉ for its new travel show ‘No Place Like Home’ to encourage holidaying at home this summer. We know through our latest research that 60% of people are planning a short trip in Ireland in the next six months and driving this domestic growth has never been more important. As we take steps to rebuild the tourism and hospitality industry, spotlighting local communities and businesses is one of our top priorities.”

Gerry McGuinness, RTÉ Commercial Partnerships Manager commented: “RTÉ is delighted that Fáilte Ireland is supporting this new series to our screens. Tourists travelling to Ireland have always told the world how great a place it is to visit, and now it’s time that we experienced how beautiful and special our Island is for ourselves. This series will give RTÉ One viewers some great ideas about places to go and things to do and prove, as Dorothy said in the Wizard of Oz, there’s ‘No Place Like Home’!

In the first episode, which airs this Sunday August 9th, ‘No Place Like Home’ will highlight the southeast charm of County Wexford, known for its long golden beaches and medieval history. Kathryn brings us back to being a child in Cahore, exploring the scenic lake walk in Johnstown Castle, and sea kayaks at Hook Head with The Irish Experience. She also meets Wexford native and Irish rugby star Tadgh Furlong for a stroll at Hook Head as he tells her about growing up and holidaying in Wexford.

Connemara will also feature in this episode with horse-riding by Lough Corrib with Connemara Equestrian Escapes; a trip on Killary Fjord with Killary Fjord Boats and strolling around the wonderful Clifden area.

The second episode, on Sunday 16th August will showcase the treasures of County Waterford and East Cork including the Waterford Greenway, a visit to the charming town of Cobh and Spike Island and the UNESCO Geopark, Copper Coast.

The third episode, airing on Sunday 23rd August, will transport viewers to County Kerry showcasing the riches of Dingle and Killarney including the scenic drive of Conor Pass, catching a boat to the Blasket Islands and visiting Ireland’s adventure playground, the Reeks District.

Only one week to go to Cork on a Fork Fest