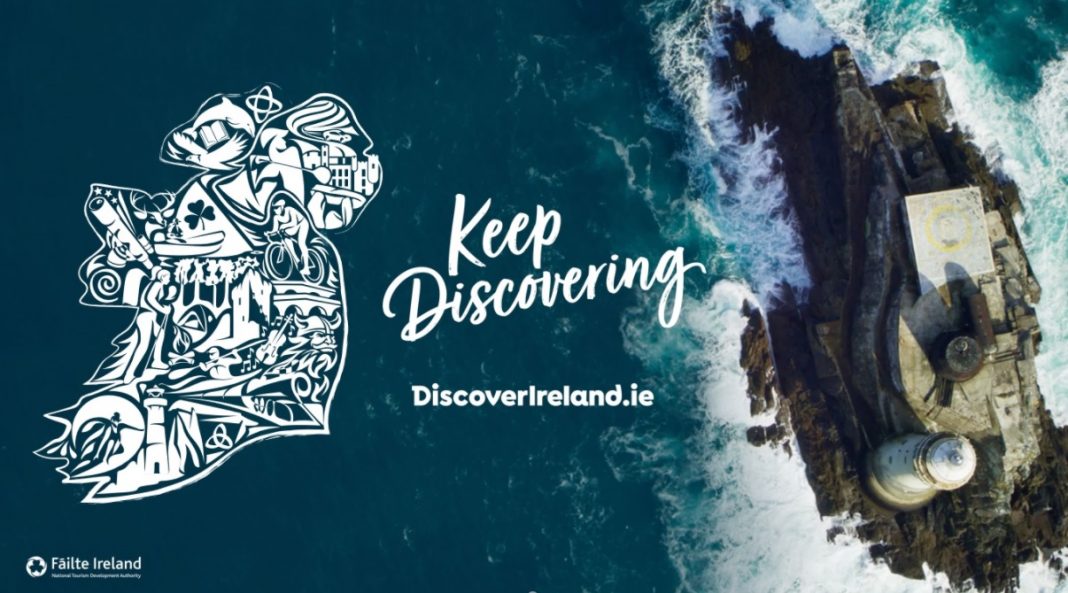 According to Fáilte Ireland’s CEO Paul Kelly, only just over half (56%) of Irish people currently take a break in Ireland.

“By putting ‘discovery’ at the heart of our new campaign we hope to encourage more people to explore more areas of the country and experience the joy and simplicity of discovery.” stated Paul Kelly.

“Our research also tells us that 4 out of 5 people return to the same location in Ireland on holidays. We are hoping our new Keep Discovering campaign will inspire them to break away from routine and experience some of the many hidden gems available across the country.”

This is one of the largest and most intensive marketing campaigns ever launched by Fáilte Ireland which aims to deliver a financial boost of €96million to the Irish economy over the next three years.

Welcoming Failte Ireland’s new marketing campaign the Minister of State for Tourism and Sport, Brendan Griffin TD added “I very much welcome this new campaign by Fáilte Ireland which will drive growth across the Irish market over the next three years. The domestic market is worth €2.4billion to the Irish economy representing one third of all tourism revenue generated each year. It also supports thousands of tourism businesses in Ireland to continue trading outside the traditionally busy summer months. This is critical when it comes to sustaining jobs, especially in rural communities. I commend Fáilte Ireland on producing a brilliant campaign.”

The campaign is set to run until 31st December 2020 with a new 60 second television ad airing this evening on RTE 1 Television during The Late Late Show. You can view a video of the ad here: https://youtu.be/yZytIM9N5Rk

Running over 40+ weeks ‘Keep Discovering’ will also feature on radio, large scale outdoor billboards, in cinemas and across a range of digital channels.

‘Keep Discovering’ includes a number of Irish talents. The advert was directed by one of Ireland’s most talented young Directors, Brendan Canty. Dermot Kennedy’s song ‘Power over me’ provides the soundtrack to the television and radio ads which are narrated by singer songwriter, Lisa Hannigan.

Find out how you can ‘Keep Discovering’ Ireland at www.discoverireland.ie and #keepdiscovering
Article Shared C/O https://www.hotelandrestauranttimes.ie