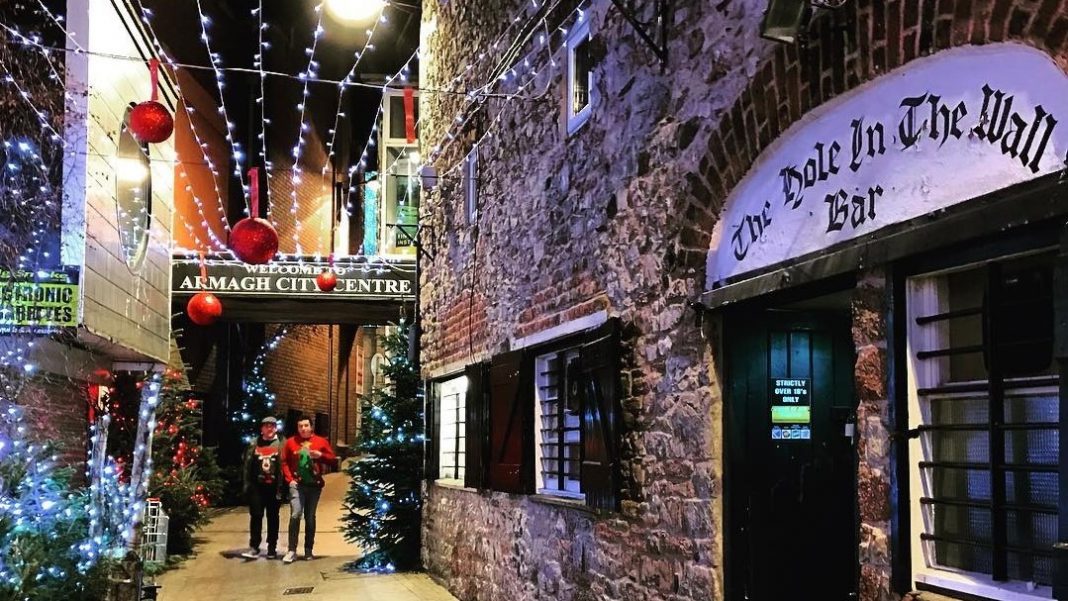 Armagh City is built on the foothills of the mountains that separate Ulster from Connacht and is very accessible as it is only 40 miles from Belfast and less than an hour-and-a-half drive from Dublin.

One of the best ways to discover Armagh and Down is to follow the Saint Patrick’s trail, which spans the length and breadth of the two Ulster counties.

St Patrick’s Trail is a 92-mile signed driving route connecting some of the key sites, which have a strong link with Saint Patrick’s life and his legacy in Ulster.

And what better place to start than the Cathedral City of Armagh, the spiritual centre of Ireland, where Saint Patrick built his first church on the ancient hilltop back in 445AD.

St Patrick’s Church of Ireland Cathedral The Church of Ireland cathedral is the focal point of the town centre and dates back to the 13th century. Inside, you’ll discover an ancient Celtic cross from the 11th century, Iron Age artefacts and a plaque commemorating the burial of the High King of Ireland, Brian Boru, in 1014.

The Roman Catholic equivalent is a relative baby in comparison, which dates back to 1904, completed 64 years after the foundation stone was laid. The twin-towered gothic construction is built up the hill from the town centre and boasts some great vistas of the town and the rolling hills of the Orchard County beyond. Inside, the ornate stain glass windows make the ramble up the hill and the entrance steps well worth the visit.

Keeping things saintly, the Saint Patrick’s Trian Visitor Complex exhibitions include ‘The Story of Armagh’, from pagan days to the arrival of St Pat and beyond, and ‘The Land of the Lilliput’, where Jonathan Swift’s ‘Gulliver’s Travels’ is narrated by a 20-foot giant.

One of the city’s newest additions, and the main reason to visit before the end of the summer, is the ‘Earth from the Air’ outdoor photography exhibition.

Yann Arthus-Bertrand’s spectacular presentation of large-scale photographs capture some of the most amazing natural landscapes from around the world and will remain on display throughout Armagh City until the end of August.

The exhibition has travelled the world through London, Paris, Chicago, Sydney and Singapore and this is the first time that the photographs have come to Ireland.

Viewing the 120 photos, each about the size of a double bed, will bring you on a tour of the city from the old cathedral and market area down to the Mall where the majority of the exhibition is housed and borders the scenic green expanse.

The photos study the environment and the impact man has had on nature, and each picture is accompanied by some startling facts that are aimed to shock in relation to our mistreatment of nature.

Nature lesson aside, the pictures make for fantastic visuals and while the tour will help you find your bearings around the city, they will also bring you on a journey around the world and into some of the remotest areas of earth where you are never likely to travel to – there is even one of the Aran Islands. The Doomsday Caravans near Nouakchott in Mauritania were particularly memorable.

Before you leave Armagh City, be sure to make a quick detour out the road to the Navan Centre and Fort, where you can visit one of the most important archaeological sites in Ireland and learn all about the legend of Queen Macha, from whom Armagh got its name.

The visitors centre contains a very clever and enjoyable interactive museum that brings you back thousands of years, explaining the histories and the legends of the area, while a cinema plays a film condensing all the history into one short. There is a longer version of the film for the real enthusiasts.

And you can also visit the Iron Age dwelling where you will encounter real-life actors, I mean, locals who will welcome you into their cosy abode and give you a crash course in battle techniques, dancing at Lúnasa and the importance of the Wicker Man.

Before you leave, take a wander up to Navan Fort, the ancient seat of the High Kings. The ceremonial site is a five-minute walk uphill from the visitors centre and a great place to take a few minutes to contemplate the wealth of history and spirituality of the area. Try to look past the giant quarry that ruins some of the nearby land, but beyond, the 360 degree views will give you an idea why the ancient High Kings chose the venue.

There are several great dining options in and around the town centre in Armagh City. I took the non-traditional route and dined at the very popular Uluru Restaurant. The cuisine, as the name may suggest, is not your typical Irish fare but of the southern hemisphere variety with emu, ostrich, crocodile and kangaroo all available. Like the name, the proprietor and head chef is an Australian original who was putting in a shift at the front of house on the night I visited. Uluru is both intimate and friendly and while the main emphasis is on all things Australian, the menu is extensive, with plenty of Irish options, sourced locally, available to complement the exotic dishes. Top notch nosh – bring your appetite.

I stayed at the Armagh City Hotel in a great location right in the town centre. The bedrooms were spacious and very comfortable and there is access to the adjoining fitness club, complete with swimming pool, sauna, steam room and Jacuzzi. The hotel is within walking distance to all the main attractions in Armagh including the Armagh Planetarium, Armagh Observatory and the Saint Patrick’s Cathedrals.