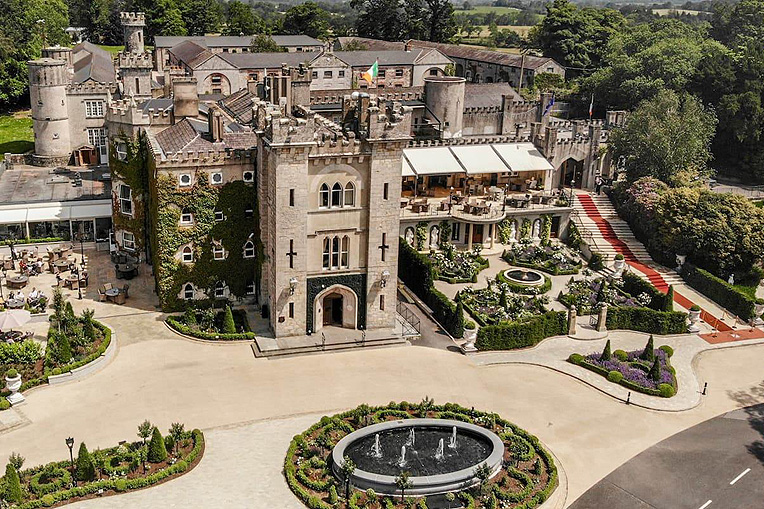 Have you ever spent the night on the coast’s edge, under the guiding beams of one of Ireland’s many lighthouses? Or been king or queen of a romantic castle for two? Well the Irish Landmark Trust has been saving and restoring heritage buildings throughout the island of Ireland that were at risk of being lost through neglect or inappropriate use and these building are now available to let as holiday homes. So why not take a festive break at one of these breathtaking buildings for a very memorable landmark holiday.

GALLEY HEAD LIGHTKEEPERS: House Perched on the edge of the cliffs of west Cork, the views from Galley Head lighthouse are spectacular as you look out over St George’s Channel. The lightkeepers house sleeps four people with one double and one twin room with a garden that can provide one of the most stunning settings for a picnic set to the sound of the crashing waves below. The lighthouse station dates back to the 1870s and is located close to the famous culinary town of Clonakilty, while the Old Head of Kinsale and Fastnet are its nearest neighbours. A second house at the station also sleep four people.

CLOMANTAGH CASTLE: Located in Freshford, County Kilkenny, Clomantagh Castle dates back to the 1430s and sleeps ten people since the restoration. The castle was originally owned by the Earl of Ormond but was forfeited to Lieutenant Arthur St George during Cromwellian times. The castle now houses four double bedrooms and one twin room and some of its most impressive features include a medieval turret stone staircase and a Sheela-na-gig – a symbolic pagan nude carved into one of the stones. Local attractions include Kilkenny Castle, St Canice’s Cathedral and the Dunmore Caves.

NO 25 EUSTACE STREET: Experience Georgian Dublin in the heart of Temple Bar at the wonderfully restored No 25 Eustace Street. Dating back to 1720, the house was home to a woollen merchant, JD Williams, in the 1840s, before becoming a workplace for Dublin solicitors, including Standish O’Grady, who was known as the Father of Celtic Revival and an influence on WB Yeats. The property can sleep up to seven people, while some of the interesting features of the house include a Bechstein boudoir piano and a freestanding bath in the bathroom.

MERRION MEWS: Ideally located just off Merrion Square in the heart of Dublin, Merrion Mews is a spacious accommodation, which sleeps up to six people. The property overlooks a stable yard, while two of the bedrooms have views of the main house. The garden is one of the few that remain in Merrion Square, while the mews is one of the best examples of 18th century townhouses in Dublin. The house contains three double bedrooms, while the stable yard remains in use as a place to water the Garda Mounted Unit while on duty in the city centre.

THE BARBICAN: This restored property, which dates back to 1825, is located on an old stone bridge and overlooks the Glenarm River in Antrim. The miniature medieval castle makes for an ideal romantic getaway in the town of Glenarm, one of the oldest towns in Ulster. The castle sleeps two people and boasts an impressive roof terrace and picnic bench, while the bathroom contains a beautiful freestanding bath. The Barbican’s coastal location would make the perfect base for a few days exploring the scenic northeast Antrim coast.

ANNES GROVE GATELODGE: A contender for one of the most romantic locations in the country, this miniature castle is located in north Cork close to Mitchelstown, Fermoy and Mallow and is available for a two-person letting. Dating back to 1853, the gothic-style castle is a haven of tranquillity surrounded by mature beach trees in a quiet countryside location. The interior’s wooden floors and ceilings, stone arches and snugs make for an idyllic weekend away. The lodge had not been lived in since the 1940s prior to the restoration and now includes a double bedroom and a wood-burning stove in the kitchen, while an evening meal can be enjoyed outside on the small patio in the summertime.

BEIT RESIDENCE: Located on the stunning shores of Blessington Lakes and surrounded by the always impressive Wickow mountains, the Beit Residence is housed in the remarkable Russborough House. The stately home dates back to the 1740s and is renowned for its painting collections, and for robberies of the said paintings, and currently houses works by Vermeer and Goya. The accommodation is located in the house’s west wing and Beit family photographs, reminiscent of life at Russborough, adorn the drawing rooms. Two double bedrooms and two twin bedrooms are available at the residence with a spacious kitchen and formal dining room.

TULLYMURRY HOUSE: This traditional Irish country house near Newry in County Down is now a holiday home ideal for anyone looking for an activity break in the adjacent Mourne Mountains. The cottage also contains a wellness area with saunas and hot-tubs, and sleeps up to eight people with two double bedrooms a twin and two single rooms. Outdoor enthusiasts will be spoilt for choice with a wide range of walking, cycling, equestrian and fishing options nearby, while golfers have a choice of two of the best courses in Ireland with Royal County Down and Ardglass both in the vicinity. The ivy clad house dates back to the 18th century and has remained in the ownership of the McMinn family since 1895. The house was fully restored in 2012.