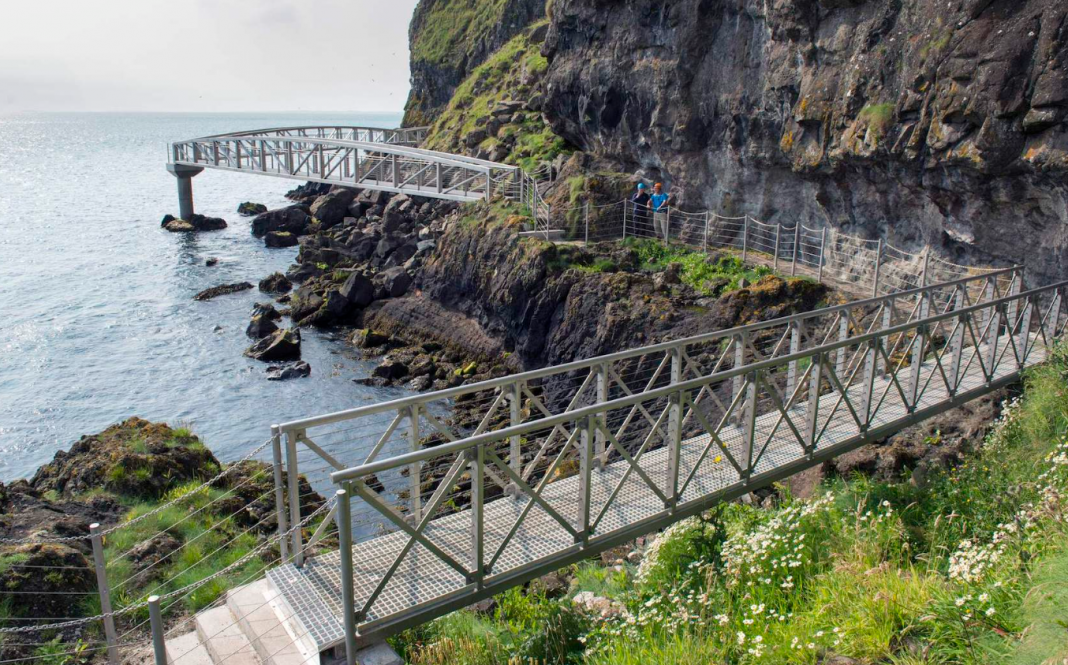 The exhilarating cliff-top and below-sea-level Gobbins Cliff Path has been called the most dramatic coastal walk in Europe.

Stretching for two miles along the spectacular County Antrim Causeway Coast, it skirts cliff edges, crosses tubular and suspension bridges, and winds its way up stone-carved staircases, through caves and down into under-sea tunnels.

To mark its springtime reopening five new speciality tours have been created which add further dimensions to the experience.

Tales of the Sea is a three-hour journey into the Causeway Coast’s seafaring and maritime history in the company of a knowledgeable tour guide. Featuring tales of smugglers, Vikings and shipwrecks, it paints a picture of the past and includes a chance to stand at ‘The Gallery’ and imagine catching a glimpse of the Titanic as it sailed past.

The family-friendly When spells go wrong – The Tale of the Dragon-Witch deals with ill-fated witch sisters and powerful spells. Effortlessly woven together, the story of fairies, witches, dragons and smugglers unfolds as you travel through towering giant stones and dimly lit caves listening out for strange and unfamiliar sounds along the way.

Keen photographers will enjoy The Gobbins Through a Lens, an intimate photography tour that will allow participants to capture the magnificent beauty of the churning Irish Sea waves and vibrant nature along the rugged landscape of The Gobbins Cliff Path. The guided, adult-only experience lasts four hours giving ample time to shoot local plants, unique rock formations and wildlife in this designated Area of Special Scientific Interest.

On the ‘Dander Aroon’ The Gobbins: An Ulster-Scots Heritage Tour, attendees will be advised to ‘houl [hold] onto their hats’ as they discover how centuries-old traditions shared with Scotland still impact the language of Northern Ireland. The tour will see the stunning vista become a stage for a fascinating historical and cultural journey.

Embracing the drama of the Irish weather alongside the drama of the cliff path, participants on the Brace the Elements: A Bracing Tour of The Gobbins Cliff Path will spend three-hours in blustery weather conditions as they take on the lower cliff path. The reward is breath-taking views over the North Channel where seals, dolphins and even porpoises hunt.

The Gobbins Cliff Path is open from April to October and the speciality tours will run periodically throughout the season. At other times a standard guided tour is available that takes visitors over its cliff-edge bridges, along stone-carved staircases, and through tunnels and smugglers’ caves, providing an exhilarating and unique experience.

The Gobbins is one of the highlights of a tour of Northern Ireland’s famous Causeway Coastal Route, which is home to an array of must-see attractions, including the UNESCO World Heritage Site of the Giant’s Causeway.

Destination Ireland Guide - 1 April 2022 0
A special photographic exhibition has been launched to mark the 10th birthday of Titanic Belfast. ‘The People Who Built Titanic Belfast’ includes 123 photographs and...

8 splendid Irish castles and manors to lay your head for...

Sleep under the stars in an Irish Lighthouse